Welcome! Glad you could join us here in my little corner of the internet where I share the random musings that evolve from my life as a tall blonde rock and roll fan who just happens to have experienced working in self-development, two marriages, motherhood, and the world of addiction recovery.
My wish is that the words written here will stir your thoughts, make you smile, offer hope and remind you that you are never alone. We're all in this together.
If you're looking for "The Ones Who Stayed", it's just moved to it's own site, just click here.
Please feel free to share your own "soul ramblings" in the comments section.
With love,
-Marti

So, it’s been the week from hell.

You know the one - that week where everything in your world appears to be flying apart at the seams and you’re running madly after it with needle and thread trying to stitch it up before it becomes beyond repair.

Here’s the short version: sick with a cold; broke; husband traveling trying to make us not broke; two adult children living at home due to a variety of difficulties; condo in a constant state of disarray due to four people living in a place designed for two; five projects running all at once at work – each that require focus and attention to detail, neither of which I possess right now; what seems like a million phone calls and/or emails with someone on the other end wanting me to fix something, make them feel better, listen to them complain, or give them money.  It just seems there aren't enough hours in the day, words in my vocabulary or dollars in the bank. Repeat for 5 days straight and there you have it.

So, I've been running. Not literally, don’t be ridiculous, who has time for physical exercise with all this going on? Running to keep up, feeling constantly behind, like the treadmill is eternally on and there is no “Off” switch.

Even better, I work in the field of self-development. I've spent years working “on myself”, raising my vibration, finding my center, focusing on my inner peace. So, I of all people, should understand that “you create your own reality”, “the law of attraction will bring you more of whatever you focus on”, “you need to take care of yourself first or you have nothing to give to others”, “love yourself and love will come to you”. Yeah, yeah, yeah – I have no time to think about that right now. Those are lovely, airy-fairy ideals, but in the next 2 hours I have copy to write, 15 more emails to respond to, and a husband who needs to be picked up at the airport, which is an hour away. Inner peace – right.

In spite of my internal mocking of my own beliefs, they are somewhat ingrained. So I take few minutes to calm myself, come back to center and envision my trip to the airport during rush hour flowing effortlessly. I see the roads being free of traffic, the flight being on time, an easy journey there and back, allowing me to get this done in the shortest amount of time possible so I can get on to the next thing.

And it happens like that. Just as I've seen in my mind’s eye, clear roads, flight on time, flashing lights and police sirens. Wait – really? Yep. 100 yards from the terminal and I’m getting pulled over. Seriously?? Who gets a ticket in the airport? It was all going so well, I was nearly there, I had almost pulled it off, why? Why now?

The officer summed it up for me. I rolled down the window and he said, “Ma’am, you need to slow down.”

Ya think? He had no idea how correct he was.

Just when I had forgotten that the Universe often has a wicked sense of humor, it sent me a cop who, other than the uniform, looked and sounded exactly like George Jefferson (RIP Sherman Hemsley) to remind me, “That airport ain’t goin’ nowhere.”

No, it ain’t…um, isn’t. Neither are any of my other projects and issues.  They’ll all still be there when I get to them, at my own pace, in my own time.  Some of the people who want me to fix them might even wander off if I don’t reply immediately or have the words they want to hear.  I can take the time to actually run, or walk, or nap, or do something that makes me feel like I’m re-filling my fuel tank so that I can keep going. What a concept.

Thanks, George. I mean, Officer.

P.S. I could have done without the fine.
Posted by Marti Bradley at 11:58 AM No comments: 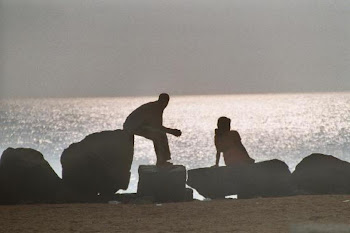 Marti Bradley
Marti Bradley works as a manager for a self-development company and is a Master Practitioner in Usui-Tibetan Reiki with more than 10 years of education in the healing arts, energy work and the journey of self-awareness. Here you will find her musings on that journey. Marti has also spent the past several decades living among, working with and loving addicts and alcoholics. The Ones Who Stayed section of this blog seeks to help those with addicts in their lives to live and love joyously while navigating addiction treatment and recovery